Fatal collisions between workers and vehicles are up to 7 times greater than during the daytime. Nightime construction is 5 times more dangerous than daytime.

Being visible at night is different from being noticed - biomotion taping signifies that you are a worker, not just another bright object.

This configuration enhances the long distance recognition of the wearer as a human figure when viewed by retro-reflected light.

You have probably seen workers with the extra bands of tape on their shirts, jackets and pants. Biomotion taping is mandatory in Europe and USA.

The benefits of biomotion have been well researched and documented by a collaboration at Queensland’s University of Technology: School of Optometry and Vision Science – Professor Joanne Wood, Minerals Industry Safety and Health Centre – Professor Robin Burgess-Limerick and Professor David Cliff. One of their conference papers can be found here: Qld Mining Safety Conference 2015 paper.

Maxcool was one of the pioneers of Biomotion taping

Maxcool uses 100 wash tape for optimal nightime biomotion safety. Up to 3 times the longevity of most tapes

Metro Trains Melbourne (Vic Rail) (partnership of John Holland, UGL and MTR) includes Bio-motion in its November 2014 clothing standards for contractors, stipulating that Bio-motion taping is a requirement for their rail track staff.

… Where a high visibility garment has sleeves or legs or both (such as overalls), significant visual benefits can be obtained by adopting an optimum bio-motion configuration of retro-reflective strips on the sleeves and legs. This entails placing strips as follows:


NOTE: This requirement is in addition to positioning of the strips on garments in accordance with the Australian Standard AS4602.1:2011. Read more. 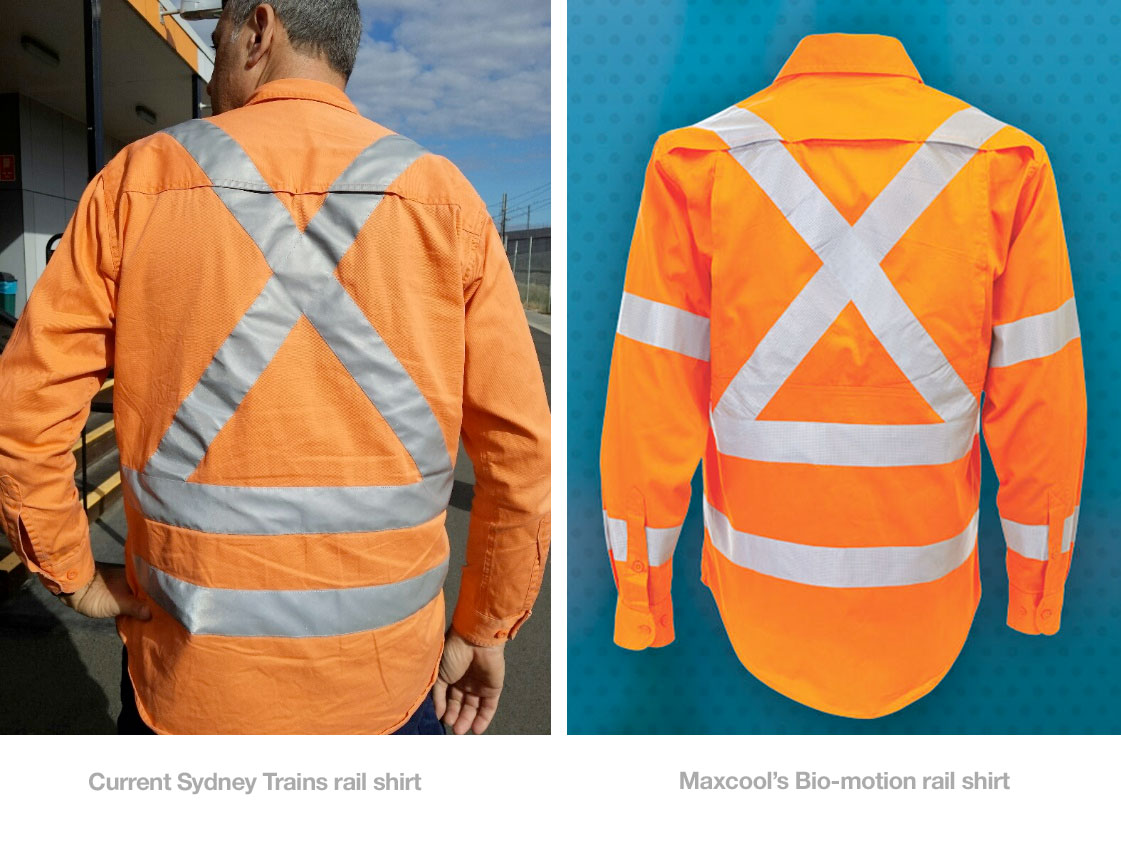 In NSW, Transport For NSW is moving towards biomotion workwear and workwear with enhanced cooling features. From May 2015 RMS employees and prequalified contractors are encouraged to wear apparel with twin tape (biomotion).

Low light levels are a constant hazard in mines. Collisions between vehicles and workers accounted for 28% of the 112 fatalities in the mining industry in Australia during 1998–2008 *

Translating road safety research on night-time visibility to the context of mining.

Extract from above paper:
By adding bio-motion markings to standard retro-reflective clothing can enhance the night time conspicuity of mining workers especially in low light. This has the potential to be an affordable and convenient way to provide a sizable safety benefit.
Read more of paper by Wood, Cliff, Burgess-Limerick

Extract from above paper: Low illumination is a hazard in underground mines and for night time operations at surface mines. Biomotion clothing has the potential to be a low cost and practical way to provide safety benefits in the mining industry. Does not involve modifications to vehicles, drivers or infrastructure.
Read more of Queensland Mining Safety Conference paper by Wood, Cliff, Burgess-Limerick